Home > Tickets > Up Coming Shows
*** We are following the most recent CDC guidelines, and encouraging our audiences to wear masks. *** 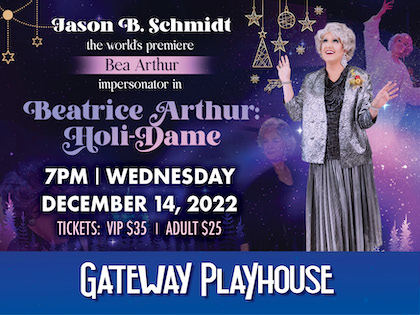 $35.00 VIP Ticket which includes premium seating and a meet and greet after the show

The man in the moon is a shiksa!  Calling all Golden Girls fans, Maude maniacs, and those who love tough broads with soft hearts, Bea Arthur is back!  Jason B. Schmidt, the world's premier (and only) Bea Arthur impersonator, channels the famed Tony and Emmy-Winning star in his deadpan tribute, "Beatrice Arthur:  Holi-Dame".  In the show, Bea pays homage to all those Jews who wrote Christmas songs.  She'll tell stories about Fiddler on the Roof, Maude, The Golden Girls and she might even sing something from the Lion King.  It's the Chrismakkuh Musical no one asked for, but everyone can enjoy - even your Aunt Karen.

Jason B. Schmidt is the world's premier Bea Arthur impersonator and the star of The Golden Gays the Golden Girls Musical Drag Troupe.  They have been seen on CNN, ABC, been talked about in the New York Times and the Associate Press and headline The Golden Fans at Sea Cruises each year.

BRING YOUR MUSIC AND SHOW US WHAT YOU'VE GOT ON OUR STAGE WITH LIVE MUSIC!

"One of cabaret's most talented troubadours with the pianistic finesse of Michael Feinstein, the smooth phrasing of Tony Bennett, and the bawdy wit of Bette Middler!"

"McAssey is the love child of Robin Williams & Mae West, and the grandson of Mel Tome!"

"Lights Out Presents - The Jersey Beach Boys".  "Imagine yourself listening to the amazing hits of the Beach Boys, while watching the smooth moves of Frankie Valli and the Four Seasons...Lights Out have re-imagined what The Beach Boys would be like if this actually had happened.  Sing along to all of the west coast hits while you dance along with moves created by one of the greatest groups to hit the musical landscape.  Lights Out bring an action-packed show, complete with tight harmonies, choreography, comedy, and audience participation!  This show will keep you captivated from beginning to end!"